Ever since Cinderella we’ve loved a makeover story. Re-casting someone who’s struggling as a diamond in the rough and then bringing out their shine is an enduring type of story, even a life affirming journey.

It’s no surprise then, that makeovers make good telly. Whether it’s a person being made to look 10 years younger or good naked, a house in disrepair being architected, or even a rusty vintage car getting back on the road, the narrative is compelling and the end result uplifting. Perhaps it’s because all of us feel like a diamond in the rough sometimes.

Really great marketing campaigns are like that too. I read 30 IPA award entries this summer, each one a story of marketers taking a struggling business and changing the way it looks. And in many of these cases, it worked. The changes might have been skin deep, but they made a meaningful difference to business outcomes.

At the end of the TV makeover show, you get the reveal. Where she gets the final look in the mirror or the photo shoot. Where the house is finished, cushions and all. Where the once rusty car roars off down a picturesque road.

Econometricians like me are present for the marketing reveal a lot. Did attitudes to the brand change? Did people search the product out more often? And the big one: did the money spent pay back?

More often than not I am looking at an ordinary campaign that no-one expects to enter into the awards. So, as I was reading through the reveals for this year’s entries, I started thinking about how potential winners are different.

And they are different. I obviously can’t share any details from this year’s entries, but in our own database of past projects it’s clear. Awards entries are a collection of campaigns with higher than usual payback. 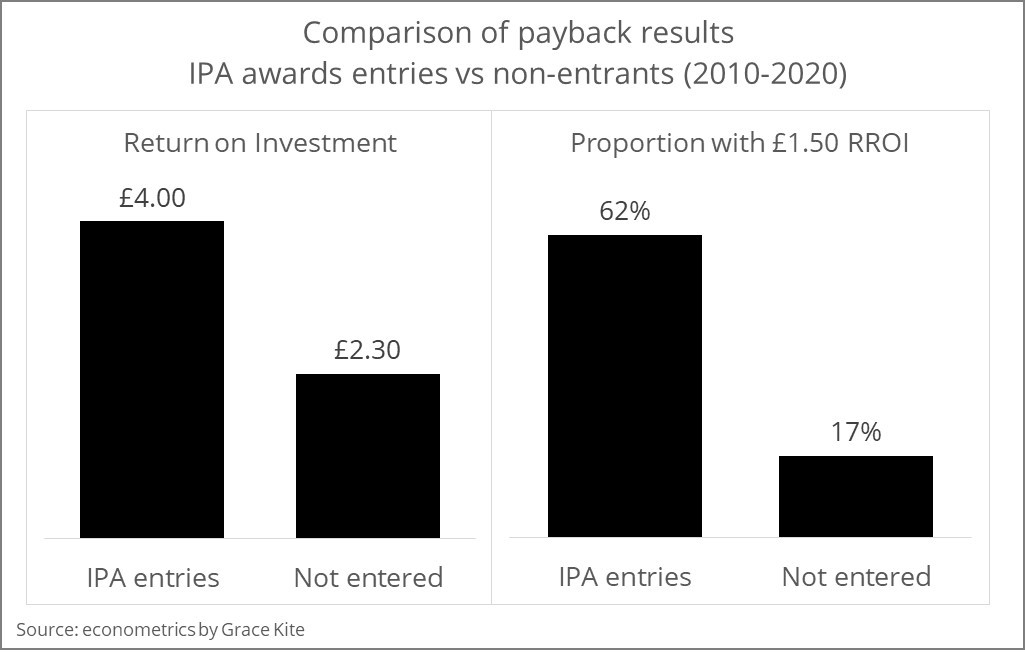 The chart above is the evidence that proves it. It compares 12 entries with 12 ordinary campaigns that aired at a similar time for a similarly sized advertiser in a similar category. Return on investment was 90% bigger in the group of entries, and the probability of an acceptable payback – of £1.50 revenue per £1 spent – 40 percentage points higher.

While its never possible to 100% compare apples with apples, we’re convinced that these results aren’t skewed by different campaigns being evaluated differently. The econometric projects that the chart draws on used consistent methods and were held to the same standards that IPA judges require. That’s just the way we work.

So what is it that IPA entrants do differently?

I’m not a communications strategist, but I am a fan of TV makeover programmes.  And the best ones are where they are truly sympathetic. Where the process includes a period of deliberation, where we the viewer get to know the person and uncover their best bits. She might have a podgy tum, but let’s show off those great legs. The 1970s wallpaper has to go, but how great will that original coving look when its fixed?

The same is true with brands. The campaigns that make up IPA entries are the result of successful introspection. They find and celebrate the best things about the brand and the business it represents, and then use the right media channels to communicate it.

Perhaps it is going to the effort of finding a brand’s best bits that makes a winner. But then again, maybe IPA-strength responses to advertising are only possible for businesses whose best bits are inherently special.

I don’t claim to have all the answers, but I wish I did. Collectively, we don’t know enough about how IPA winners are different to ordinary campaigns. I googled “what is different about IPA award winners?” and got to ale recipes before finding any serious thinking on it.

There’s a real opportunity to learn there, and so far, it’s woefully untapped.

This year’s Effectiveness Week (12-15 October) kicks off with the IPA Effectiveness Awards virtual Ceremony on the eve of Monday 12 October. Its followed by three afternoons of unmissable virtual conference – EffWorks Global 2020: Marketing Effectiveness for a post-Covid recovery. Secure your free place at ipa.co.uk/effworks